Although we humans rely heavily on our senses of sight and hearing, our world would not make much sense to us if we did not have language in which to think, and words with which to know things. By naming something, our minds are able to categorize, connect, apply, analyze, evaluate, and represent everything that enters into our consciousness. For those of you that know your bible, one of the first things God does after creating Adam is to see what Adam would call the living creatures God had made (Gen 2:19). We intuitively name things in order to know them and use them.So it is with music.

Once a person has learned musical patterns from his or her musical environment, those patterns are given names so that they can be known and used to knowledgeably listen to, perform, and respond to music. We call the notes by solfege names, and we call durations by rhythm syllable names. We call pitch sequences chords, scales or intervals and further refine our naming with words like major and minor, dorian and mixolydian. When we are able to associate these names with musical sounds, then our hearing and performing of them becomes more accurate, musical, and expressive.

Yesterday, one of my first grade classes was singing the song, “Ebeneezer Sneezer.” The song is useful for teaching solfege, because it ascends the do major scale one phrase at a time, and then ends with a quick descending scale. 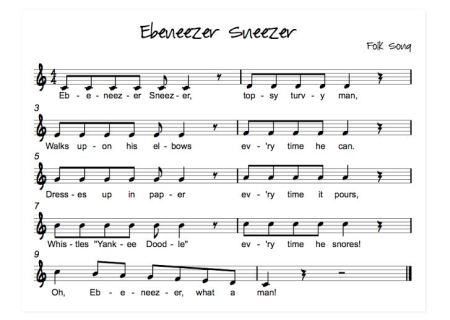 I heard that re and la were out of tune, whereas the other pitches were sung accurately. I stopped them and told them those notes were not correct, and then had them sing the song using solfege. Because they had a grounding of doing tonal patterns with solfege, they immediately sang accurately what they were unable to sing accurately singing the lyrics. I then told them to sing the lyrics, but think about the solfege while they sang, connecting the two. On their first attempt, the inaccuracies were corrected. The mind connected the patterns learned with solfege (after learning them on a neutral syllable) with the notes in the song, even when the solfege was no longer being sung. That is the power in a name; it makes information applicable and usable.

Here is another example, this time one with rhythm. I had taught my third graders the song, “Too Ra Loo.” They

have proficiency in sight singing but they were not familiar with the rhythm of dotted eighth and sixteenth. I wrote the melody on the board, and had them quietly sight sing it, concentrating on the pitches. Their  goal was to “name that tune.” After a few incorrect attempts, four children almost at once recognized the song. The class sang the song, and then I drew attention to the dots and sixteenth note beams on most of the pairs of notes beamed together. I reminded them of the rhythm of four sixteenths, and had them sing it with the rhythm syllables “du-ta-de-ta.” Then I told them that the dotted eighth and sixteenth rhythm was simply the first and last syllable, “du___ta.” That wonderful “ah-ha” look appeared on most of the faces, and they immediately were able to connect the rhythm they had already been singing, to the notation they were now seeing. The connection came through a name,”du___ta,” which in turn was understood by connecting it to another name, du-ta-de-ta.”

The amount of information we process while performing music from standard music notation is immense and remarkable. A novice can easily be overwhelmed by the sheer volume of data that must be cognitively handled. Only by organizing that data into comprehensible structures, patterns, and groups can a person hope to become accomplished at music reading. Luckily, most of that organizing and processing happens subconsciously, or else the very act would hopelessly bog us down. But knowing that processing is occurring, and teaching music in such a way that music can be understood in the way our brains naturally make order of our world, is essential to effective music teaching.