In this, the centennial anniversary of Leonard Bernstein’s birth, all sorts of things that this American musical icon did are being brought out into the public consciousness. Of course, most know of Bernstein’s work as a conductor, composer and teacher, what with his numerous recordings, lectures, young peoples concerts and musical compositions. Of all that he accomplished, he once said that he was most proud of those young peoples concerts. He was so devoted to teaching, that he developed what he hoped would become a school reform method called Artful Learning. This is a method I have just begun to look at, but it intrigues me enough to want to share with you, and to begin using at least its principles to benefit my students.

Bernstein often referred to “universality” in reference to music. He believed that the expressiveness and enjoyment of music was universal, but he also understood that teaching was necessary in order to enable people to fully enjoy and fully appreciate the music he so loved to conduct, talk about, and perform on the piano. Out of this belief system came Artful Learning. In a nutshell, the method is to begin with a concept; not a musical concept but a universal one (there’s that word again). For example, let’s take the concept of enculturation–the familiarizing of a population of people with cultural norms–theirs or another. Let’s propose an essential question regarding our concept of enculturation. How does enculturation make life more meaningful? That question will guide our entire instructional unit.

Now that we have a concept and an essential question, we need a masterwork that is relevant to them both and that will serve as the basis for student inquiry. Let’s select “The One And Only Cereal” from A Quiet Place by Leonard Bernstein. The masterwork doesn’t have to be a Bernstein work, nor does it have to be a musical work, but in our example we will use music. The students, with the essential question in mind, listen to the masterwork, and then respond to it. In this masterwork, there are at least three cultures represented–jazz with its prominently African American roots, Western European 19th century art music, with its prominently Anglo and European roots,  and serial music, with its prominently academic roots. Most listeners will not only hear the different cultures represented, but will be confused by some while easily taking in others. This is because listeners will have been enculturated in one or two but not in the others. The students can experience the differences in listening to music that makes sense compared to music that does not make sense due to either being enculturated into that musical culture or not. The students experience the masterwork in a multi sensory way, through not only listening to the music, but moving (or trying to move) to the music,  through drawing, interacting physically with objects, like tossing a scarf gracefully or wringing a towel aggressively, through making facial expressions to any number of other visual, auditory, or kinesthetic responses they or the teacher might propose. All of this is the first phase in the Artful Learning Sequence, and that stage is called Experience.

Throughout the experience stage, the students will collect observations and questions from their experience of the masterwork. These observations and questions will be the basis for the next phase, which is inquire. The essential question focuses the students inquiry. Students research the essential question in light of their experience of the masterwork,  and engage in hands-on learning tasks to test, probe, demonstrate and explain the concept, which you will recall presently is enculturation. Students research the concept not only from a musical standpoint, but also using the interdisciplinary content to investigate the subject matter even more deeply. This is key to the method. It is designed to be interdisciplinary. One of Bernstein’s favorite mantras was that  “the best way to know a thing is in the context of another discipline.” What was it like to arrive in a 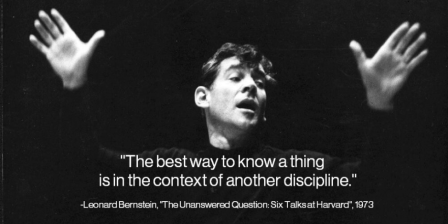 new country with no experience with that country’s culture, practices, language, or just general way of doing things? Students can then connect being a new immigrant in unfamiliar surroundings with being a new music listener experiencing unfamiliar musical surroundings. It takes time to learn your way around. What are some things a person new to our country would want to know right away to feel more comfortable and at home? What are some things you’d like to know to make you feel more comfortable with serial music, or jazz, or classical music? What musical idiom are you most familiar with and how would you help someone who had never heard your music before come to understand it and enjoy it? You see how the inquiry builds momentum as it goes along?

The third phase is create. Students use their learning and creative ideas to create an original work that manifests their understanding of the concept, which in our example is enculturation. This could be a play, ballet, song, poem, or whatever students and teacher can come up with. Students consider several possible mediums for their project to determine  how best to represent the academic content from their unit of study in an original artistic work. They first construct a rough draft of the work,  then continue to evaluate and revise their it until they determine that it is ready for presentation.

Once the original artistic work is ready for presentation, students are ready for the fourth and final phase, reflect. Students consider the process they have worked through metacognitively, asking themselves how they learned, and cognitively, asking themselves what they learned. They document these reflections with detailed narratives. Students discover connections consider practical applications of their new knowledge. All of this strengthens students as more self-directed as learners.

Much of what I have described here is not new to many music educators. We routinely teach about repertoire, creating cultural and purpose contexts for the musical works we teach, and we often bring ideas and concepts from other disciplines into our music lessons. Social studies (historical context), science (the science of sound), math (ratios of sound durations and beat groups) and Language Arts (dramatic form) all have been integrated into our music teaching for quite some time. What makes this method different is that it places artistic works front and center. It showcases not only the artistic excellence with which they were born, but of the universality of harmony, emotions, collaboration (of sounds in music and of performers in presenting it). It also makes the arts desirable and accessible to teacher other than of the arts; in fact, Artful Learning is intended to be a school-wide practice wherein teachers of all subjects use the arts to teach their discipline in this arts-centered interdisciplinary approach. I will be using this method initially to teach a unit on Latin American Music this coming school year. I will be writing periodically on my progress.