Since Friday, I have been sharing a presentation I gave at two conferences of the Association of Christian Schools International (ACSI). In this session, I gave an overview of what the very youngest human minds can do musically, and how early childhood educators who are not music teachers can still include music in their programs. Today I begin with discussing why educators who are not music teachers should care about music instruction in their classrooms.

Now being the dedicated and outstanding teachers that you are, you may be going into a sort of panic right about now. You want to take advantage of that window of opportunity, but there are problems. “Well that’s great, Robert, but I don’t have the time or the expertise to be giving music lessons in my classroom.” If you’re thinking that, you needn’t worry. You don’t have to be a music teacher. Just using music in your classroom a little more than you may be doing now, in ways that are a little more targeted to the musical needs of children and their natural musical abilities will make a big difference. Let’s first see what very young musical minds care capable of doing musically, and then I’ll show you what you, yes everyone of you, can do with music in your classes.

I would like to explore the human brain at its very early stages of existence, even before a child is born. Just a short time ago, in 2013, researchers in Finland (Partanen, Kujala, Tervaniemi, & Huotilainen, 2013) found that a child still in the womb makes mental representations of a melody played outside the mother’s womb. They learned this by having mothers play Twinkle, Twinkle, Little Star 5 times a week for their unborn child during the last trimester of pregnancy. After these children were born, at age 4 months, the researchers played altered versions of the song to them, and measured brain activity while they listened. They measured increased brain activity for unchanged notes compared to changed notes, and compared to children for whom the music had not been played in the womb, they showed greater brain activity overall. All this to say that, the 4-month-old children recognized music they had heard before they were even born.

In a study done in 2013, researchers found that infants between 4-1/2 and 6 months recognized phrase endings in Mozart’s 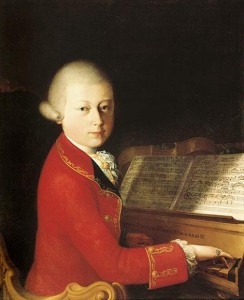 music, and not in Mozart’s music where the researchers changed the phrase endings (Krumhansl & Jusczyk (2013). In another study (Lonie, 2010), researchers found that 9-month-old infants could tell the difference between conventional and unconventional melodies as long as the last note was predictable. This is remarkable, that already, after just 9 months, infants know how music they have been exposed to is supposed to go. They have already begun to perceive musical grammar, just as they also perceive linguistic grammar. As children get older, and their familiarity with music further increases, they can tell the difference between conventional and unconventional melodies regardless of the predictability of the last note. Papousek and Papousek found that 2-month-old infants can match the pitch. loudness, and melodic contour, that is the shape of the ups and downs of the pitches, of their mother’s songs, and that at four months old, they can match rhythmic structure as well. These finding of musical abilities just a few months into life are so important. If these capacities are left unused for an extended period of time, they will weaken and fade instead of strengthen and grow. That is why it is so important for newborns and infants to be placed in a musical environment where they have the opportunity to match pitches and rhythmic structures with musical stimuli there for them to encounter. Already, at 2-4 months, the young child is demonstrating a degree of intellectual control over pitch and rhythm. Before he or she enters kindergarten, they will have added emotional response.

One thought on “The Amazing Human Musical Mind, Part 2”