When I used to go on family vacations, my Dad always had a map handy. He had it all folded so that the portion of the map he needed was visible while the rest of the map was folded underneath. Then, he’s hold the map so that the direction he was driving was facing the front of the car. That way he could easily see which way to turn. It was his way of translating a two-dimensional map into actions taken in three dimensions. With pianos, we have a similar problem. Music that goes up goes to the right on the keyboard, and music that goes down goes to the left. With the left hand, finger numbers that go up play notes that go down, while in the right hand, finger numbers that go up play notes that go up. Some have suggested that creating computer software that rotates the keyboard ninety degrees so that notes that go up go up, not to the right, is the answer, but eventually every pianist has to play a real piano, and no one I know can play one from the side. I would like to propose a more practical approach; one that likens reading music to reading a number line. On a number line, numbers that go up go to the right, just like notes on a piano. And on a number line, numbers that go down go the left, again just like on a piano. If numbers are used for note names instead of letter names or solfege, then playing notes on a piano can be just like travelling up and down a number line. As the numbers get bigger or “go up,” the notes sound higher in pitch or go up, and as the numbers get smaller or “go down,” the notes sound lower in pitch or go down. The values of the pitch numbers can be associated with relative highness and lowness in pitch, and our keyboard/number line moves in the familiar left and right direction.

This also more accurately represents the science of what is really going on. As pitch gets “higher,” the frequency of the sound increases. For example, the frequencies of the eight pitches in a one-octave C major scale are C(^1)=261.63, D(^2)=293.66, E(^3)=329.63, F(^4)=349.23, G(^5)=392.00, A(^6)=440.00, B(^7)=493.88, C(^8)=523.25. When we say a pitch is going up, what is really being described is a pitch that has a higher frequency than the preceding pitch, and is representing by point on a number line to the right. When saying the music went up, we make an abstraction of what we hear going in an upwards direction in space, but this is not in fact what is physically occurring. This abstraction is represented in our standard musical notation by placing the note that went “up” higher on the page (or closer to the top of the page) than the preceding note.

Of course we don’t teach young children about frequencies, but we do teach them how to count, and a number line is a tool 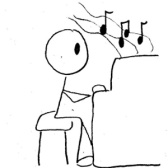 for doing so that many of them are familiar with from their classrooms. Seeing the piano keyboard as a number line is an easy transfer for them. A number line can be made and set beyond the black keys leaning up against the back of the keyboard and referred to during practice and teaching sessions. The number line can be moved so that it aligned with any tonic, and is used as tonal syllables, with the tonic always aligned with “1.” When pitches are sung, the student still uses fixed do, but when they are played, he or she thinks of them as numbers on the number line. If the teacher prefers to retain letter names for notes, a “letter line” can be used instead, and the student can be taught to think of letters going up and down as number do. By establishing up and down as a function of numerical values attached to pitches, the left to right reading of a line of music can be disengaged from pitch direction, avoiding the contradiction of up/down versus left/right.