Given the choice, I’m sure I would learn more about music in a class that featured musical genres I liked and that I was familiar with. It is a solid principle of teaching that new concepts should be taught within a familiar context. Introducing new music and a new concept at the same time is apt to leave students confused and frustrated, because there is simply too much that is new to make sense of and understand. I came upon this realization through teaching my students lessons on creating music. Being, as many of us are, conservatory trained in music, I approached music composition from the perspective of Western European harmony and voice leading. When students followed my plan for composing, they were apt to create music that sounded good in the sense of not sounding random or poorly planned, but it often didn’t sound like anything the students were particularly excited about having written.

There were two major problems with my approach. First, the students were not writing in a musical idiom that interested them, or through which they could find an outlet for expression. Second, the students were writing music that was unlike any other music they were likely to come in contact with in their daily lives. Even though they were connected to the music as the composer, they were not connecting with their own work because it really wasn’t theirs, it was written to my specifications.

To address these problems, I tried a different approach. Instead of crafting a melody based on harmony and voice leading, and one that had to be written down in standard music notation, I tried giving students a text and having them write a setting of the text in any melodic style they chose. Though many of my students prefer rap, I prevented them from writing rap songs because I wanted them to create melodies for the lyrics, not just rhythms. I also gave them  the requirement that they could only use voices, and that the song must somehow build to a climax and then relax to the end. They were to work in groups of three. The initial work was to try out ways of singing phrases of the text, and to come to a consensus on the best melodic fragment for each, working them together into a single melodic 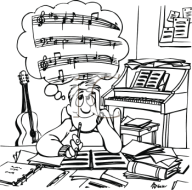 line. It was an exercise in brainstorming with singing. Eventually, the students found beat, tempo, rhythms and meter in how they were singing the text, and began to add ostinati to use in place of the forbidden drum part. As each group worked through the assignment, different musical styles began to emerge out of the students’ prior musical experience. One group began working on a pop song, another a gospel song, still another a quieter anthem or hymn-like song. Often, there was a dominant group member whose idea or willingness to sing his or her ideas drove the early stages of this songwriting. Other group members would add vocal accompaniment, or arrange solo and tutti sections, including harmony or call and response. Students were fully aware of what their work sounded like throughout, because it was all worked on aurally. As ideas were agreed upon within a group, the students would rehearse the song, making changes as they went, but ever reinforcing their memory of their work so that notation, at least for the moment, was unnecessary. As I monitored and encouraged each group, students became eager to finish their songs and share them with the other groups. All musical choices were personal and relevant to the students, so the songs and their performances of them were expressive and meaningful.

Another advantage in this approach, particularly restricting the students to voice only, is that the concepts of harmony and voice leading naturally work themselves into the compositions. Students settle on only those musical ideas that they can sing, which naturally lead to good voice leading. Students also tend to arrive at melodies that imply conventional chord changes, which is the result of good voice leading. This is how all those theoretical rules came about anyway–they were gleaned from common  practice as a description of how composers had written great musical works, not as a prescription of how composers should write great musical works. A fluent speaker doesn’t need to consciously keep grammatical rules in mind in order to speak; a fluent composer need not keep music theory rules in mind in order to compose. If the composer is well-versed in the musical genre in which he or she will write, those rules will be followed intuitively. There is always time for going back and using student compositions to illustrate music theory principles later, just as Beethoven sonatas seem to always find their way into college theory analysis courses.