What is musical ability? This question is not as easy to answer as first appears. It is tempting to define musical ability in terms of performance skills, and those are typically made manifest in public performances. Restricting a definition of musical ability to performance excludes non-performance musical behaviors, or musical behaviors that are needed to prepare a performance, but are not evident toan observer during a performance. A more inclusive definition was proposed by Hallam (2006), who found that subjects in a research project completed the phrase “musical ability is” with the following: expressing thought and feeling through sound, being able to understand and interpret the music, communication through music, responding to music, playing or singing, having a musical ear, listening and understanding, appreciation of music, creativity, evaluation skills, technical skills, composing or improvising, reading music, and knowledge about music. While some of these are primarily performance dependent, most are not. Musical ability is as much about the cognitive processes of understanding, responding and knowing as it is about performance.

Expressing though and feeling through sound could be performance, composing, improvising, or even using non-linguistic utterances such as staccato “ah, ah, ah” to express excitement or “ooh” to express empathy. Howard Gardner addressed this aspect of musical ability by including in his explanation of musical intelligence a sensitivity to rhythm and sounds in a person’s environment, and a preference for being taught with rhythmic speech. Those with musical ability take on a sonic flamboyance in the way they communicate that exceeds the norms of everyday communication. 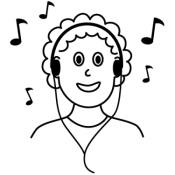 performer. Listeners become responders to music in part when they determine and respond to the expressive intents of the composer and performers, while performers determine the composer’s and their own expressive intent in preparing and giving a public performance. Understanding takes in this expressive and emotional aspect of music, but also includes cognitive activity that organizes the physically heard musical sounds into structures that make sense and that are consistent with cultural and stylistic norms.

Communication through music is primarily something performers do to an audience, but the audience is necessary for that communication to take place. There is a shared understanding of what is happening musically, and the effects it all has on those who hear it, that makes the performer’s communication through music successful. For example, the performer places emphasis on certain notes, and the listener uses those emphases to detect meter, and to perceive the expressive affect. Listeners who are fluent in the conventions of the music to which they are listening are using this aspect of their musical ability to make structural and emotional sense of the music. A listener continues to use this ability to respond to music. Response to music can be in many forms including movement, emotional, thematic, structural, and contextual. Performer respond to each other as they play or sing music, and each response has an effect on how all the others in the ensemble perform, thus shaping the performance.

Having a musical ear can also take on many forms. It may be that a listener recognizes a motif from another musical work in the one he or she is listening to, or it may be that a person can use an instrument to pick out the notes of a tune they have heard. People who can “name that tune” in just two or three notes have a good musical ear. It is worth noting that much of this particular ability comes from experience and an extensive repertoire of melodies committed to memory on which a person can draw to identify and connect with. People with a good musical ear are also highly sensitive to intonation and in tuneness, and may also have perfect pitch.

Evaluation skills is evidence of musical ability in performers who can use evaluation to refine and rehearse, of music critics who can judge the merits and shortcomings of a performance, and of listeners who can assess the quality of the musical work and the performance. A person evaluating also draws on knowledge about the music and performance. Knowledge about music includes cultural, social, historical, form, structure, performance practices and instrumentation, expectations, and expressiveness. Any one of these, or any combination, must be considered musical ability. Under this definition, virtually every student can be considered to have some form of musical ability, and none can justifiably be excluded from a school music program because of lack of talent. There ought to be opportunities for students to use their musical ability or abilities in whatever form they are present, within a school music program.