Dissonance is one of those musical elements I love to teach. This is because I love dissonance in music. For me, it is what makes music expressive, passionate, driving, exciting, powerful, and fun. Like anything else, too much dissonance is not good, but used in a balanced and skillful way; it turns very ordinary music into something much more.

Let’s look at some examples of dissonance and discover what the different kinds of dissonance are, and how each kind affects the expressiveness of the music. There are three main types of dissonance in music: harmonic, melodic, and metric. Each is made manifest by being a violation of an expectation a listener has on what will happen next. When the listener’s expectation is not met and the consequent violates the musical grammar of all idioms with which the listener is familiar, then the music at that moment is perceived as dissonant.

First, listen to this example of harmonic dissonance. The melody and meter conform to established musical grammar for Western art music, but the harmonic content does not. As I listen to this piece, I enjoy the rhythmic vitality and turns of the melodic fragments, while the harmonic dissonance creates a resistance within me that wants to run the other way. The combination of the attraction/repulsion response contributes to the overall expressiveness, or even drama, of the music.

Our next example is of melodic dissonance. Because this piece is monophonic, there is no possibility of horizontal harmony. The only harmony possible is that which the linear movement of the melody implies. Our enculturation with Western art music, and possibly an innate preference for diatonic overtone relationships, leads us to perceive certain intervallic movements as dissonant because they are outside he possible outcomes of expected musical grammar. I have provided a score for you to follow as you listen. Make special note of the occurrence of tri-tones, and how they stand out as dissonances, even in contrast to other non-diatonic tones such as the switches between f-sharp and f-natural. 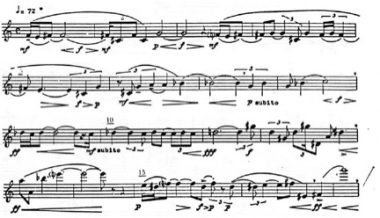 Finally, metrical dissonance occurs when the pattern of strong and weak beats the listener has settled on as the meter is disrupted by contrary musical events. There has been some discussion elsewhere as to whether or not backbeats in American popular music qualify as metric dissonance. The argument for this is that in common time the first and third beats are traditionally strong, and the second and fourth are traditionally weak. However, this measures dissonance in one genre (popular music) against the concept of dissonance in another (Western European art music). This is an erroneous presumption. Dissonance must be considered within the context of cultural norms for the specific musical idiom being addressed.

Biamonte, in defending the opposite view, wrote, “Because it is an essential component of the meter, functioning as a timeline—a rhythmic ostinato around which the other parts are organized—I consider the backbeat in rock music to be an instance of displacement consonance rather than dissonance. I hold this view in part because there is still an accent on beats 1 and 3, as demonstrated by the propensity of musically untrained listeners to clap on beats 1 and 3 of a backbeat rather than 2 and 4 (see Hein 2013). More importantly, the backbeat is contextually consonant because it is a basic rhythmic unit that typically continues throughout the song, with no expectation of a resolution to a consonant pattern.

Many instances of metrical dissonances can be found, including hemiolas, elisions, syncopations, and beat displacement. Meter changes, in and of themselves, are not necessarily dissonances as long as the listeners can correctly the change of meter. Listen to the third movement from Haydn’s Op. 9, no. 3. At 1:18, you’ll hear metric dissonance by beat displacement.