Polyrhythms are defined in the Merriam-Webster dictionary as “the simultaneous combination of contrasting rhythms in music.” In the Harvard Dictionary of Music, one learns that a polyrhythm is “the simultaneous use of strikingly contrasted rhythms in different parts of the musical fabric.” In Western art music, the term is most often used not in reference to common contrapuntal lines, but for limited uses often referred to as cross rhythms. An example is this figure from “Prelude” from Pour le Piano by Debussy.

From this example we can observe two important characteristics of polyrhythms. First, none of the divisions of the beat in one “part of the musical fabric” coincide with any of the divisions of the beat in the other part. The result of this is a “striking contrast” between the two rhythms. It is not necessary for the notes occurring on the beat to be the same as they are here; it is only necessary that the first beat of the metrical unit coincide in each rhythm. A more extended example is found the Op. 21, no. 2 by Johannes Brahms. 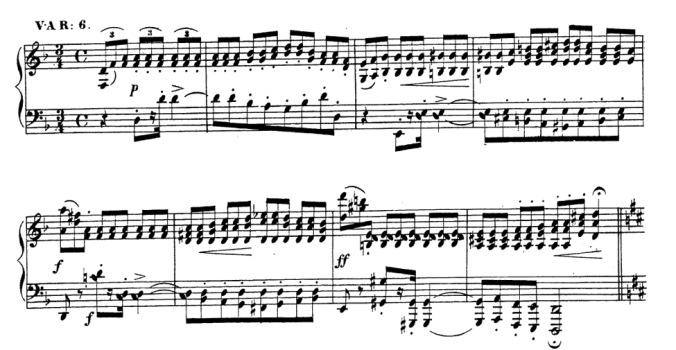 In this example, we again find simultaneous duple and triple divisions of each beat, but we also find quite a bit more. There is the recurring sixteenth note rhythm that  introduces a different beat division and providing additional contrast. This contrast is all the more striking because of it being set up by the triplet on the previous beat. The listener is prepared to hear a continuance of triplet rhythm, and instead is greeted abruptly by the dotted rhythm. Also, although nothing in this music disrupts the perception of triple meter, the tied quarter note extends the beat into the next measure, producing a grouping structure spread over a times span of two measures. All of the cross rhythms are contained within two-measure groups and within the same metrical structure which is shared by both parts. These are defining characteristics of polyrhythms: they are contained within a metrical group, and do not produce different meters. If two simultaneous meters were produced, that would be polymeter,  not polyrhythm.

Polyrhythms are the rule rather than the exception in many musics of the world. West African drumming is known for its combinations of duple and triple divisions of beats, often within twelve beat cycles. Kotèkan rhythms of Bali are even more contrasting, though they are made of a texture of two voices. A good example of these rhythms of Bali is this one:

The contrasts between the two parts is striking indeed, while the entire pattern is contained within a single metrical unit and no contrasting meters is found between the two parts. One may also notice that these two parts are really the same rhythm out of phase with each other, which creates the polyrhythm. The pattern that begins the upper part is found beginning on the second beat of the lower part. This construction was used effectively by Steve Reich in his composition, Clapping Music.

While much of the rhythmic excitement of Stravinsky’s The Rite of Spring comes from frequent shifts of meter, these are not examples of polyrhythms, because there are unison rhythms that change meters frequently, but not different rhythms played simultaneously. There are, however, examples of polyrhythm in the work, such as this one, found very early on in part 2 within the string parts. 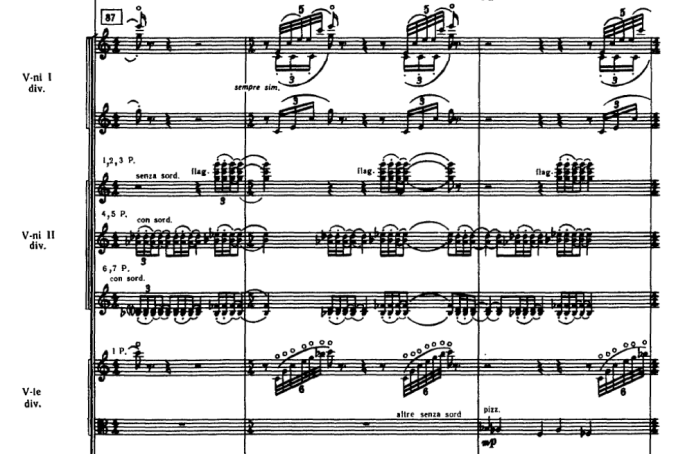 If your students have not tried performing polyrhythms before, start with this basic West African pattern from Will Schmidt’s World Music Drumming.

WITH  half rest, quarter note triplet

Another approach is to have students repeatedly chant phrases that use polyrhythms, and then have them clap what they are chanting, and finally clap only. For example, you could use “sud-den-ly no-b0d-y knew where they were” to three triplets and and a quarter note, while at the same time another child or group chants “ev’ry where they looked was scar-y” to four pairs of eighth notes. Chanting words seems to make it easier to maintain an independent part. You could also use rhythm syllables for the same benefit. The important thing is not to give the two groups of students rhythms in two different meters. This, as we have seen, is polymeter, not polyrhythm, and is much harder to do well.