When it comes to performing music, I think most music educators agree that through some combination of general music classes, ensembles, chamber music, peer teaching and learning, and private lessons, our students will develop the musicianship necessary for them to have a lifelong relationship with music that includes taking on the roles of audience, performer, and creator of music. The standard by which excellence in music performance is measured in our world of music education is how well in multiple categories our students perform onstage. If we record our concerts, we have an artifact of what the students presented during that concert, and except perhaps for some added reverb and fine tuning of equalization, what they played is what you get.  Recordings should be reproductions of live performances.

Last week, I was reminded that there are far too many who take a different view. This was brought to my attention when the outcry occurred over Mariah Carey’s imperfect live performance in New York City at the tree lighting event. How dare she sing live? How dare she force us to listen to her voice crack a few times? How dare we be subjected to any imperfections in her singing? Meanwhile, in another corner of the universe, Tony Bennett and Lady Gaga are touring, crooning away at the “standards” with rarely a perfect rendition all night. The imperfections are part of the live music experience, and the cracked notes are by now part of Tony Bennett’s sound and dare I say charm and appeal. He and others like him are consummate musicians and performers How is it that these two universes of musical standards are now co-existing? 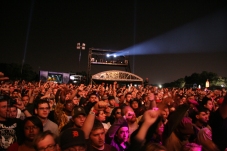 musicians to live up to the standards of perfection attainable in studio work. This problem has  challenged classical orchestral musicians as well. Rarely will you hear a perfect live performance of anything, even by ensembles whose ranks are exclusively the greatest musicians in the world. Back in the days of Georg Solti leading the Chicago Symphony, they were regarded by many as the only orchestra in the world that could record live and sound studio clean. At least the great symphony orchestras of the world haven’t resorted to “bow-syncing.” The whole Mariah Carey incident reveals that for many, live performance is not really live, and isn’t really about the music–it’s about the personality standing in front of an audience lip-syncing to perfect pre-recorded tracks. This was also on display in the recent “live” broadcast of Peter Pan on NBC. If this broadcast was live, how is it that the lips of the actors and the clang of the tambourine didn’t sync with the sound? Lip syncing in live theater? Really? The “live” part no longer refers to the music, but to the performer.

This approach to live music transforms the electric excitement of spontanaity and the rush of “in the moment” expressiveness into pre-calculated, predictable, packaged performances that always sound exactly the same and that can never have the excitement of a live performing artist brings, because they aren’t actually performing, they’re pretending. If you can get it right after who knows how many takes. then that’s the perfection audiences will hear. When everything is pre-recorded in a studio, performers can get away with a whole lot less talent and ability, as long as they are attractive with legions of adoring fans. Then, when they are thrust into the position of having to really sing live, their deficiency is revealed. It wouldn’t sound so mediocre if it weren’t measured against manufactured studio perfection, but because it is, it upsets audiences. Imagine, being outraged that a singer actually sang for them.

For my part, as a music educator, it is more important than ever to show and teach my students that making music and performing it for audiences–really performing it– is fun, invigorating, and dare I say even honest. The only way excellence in music performance can be restored where it has been lost, or maintained  where it is threatened, is to support musicians who do it right, and tell the rest we now realize what we were missing and we want truly live music back. And if you don’t sound quite as good as your studio recordings, we understand. We can hear that in our homes. But while we’re at a concert, we want to hear you.