If every student learned the same way, and that one way was the same way you learn, then teaching would be easy. But as we all know, everyone doesn’t learn the same way, and we as teachers must be alert to how our students are trying to learn, and learn from them how to teach them. This may sound odd to some teachers. “Do you mean that I’m supposed to ask my students how to teach them?” Yes, in some cases, that is exactly what we need to do. Success in school should not be dependent on whether or not a child happens to have the same learning style as the teacher. Many students struggle not because they lack ability or effort, but because they just can’t think and reason in the mold we have given them to work with. Today in one of my 8th grade music classes, I was given the opportunity to learn how a student was trying to learn, and then to adjust my teaching accordingly. The result was, the student succeeded where she had been unable to succeed before.

The student was trying to learn how to play the melody of the refrain from the Imagine Dragons song “Demons.” This was in a general music class where the students have worked on several easy piano pieces, reading the notes from standard music notation. My way for them to learn has been to given them the printed music, review the note names and on the staff and the keyboard, and then have them practice in small groups. I work with one small group at a time on the piano while the other groups work on keyboard apps on their smart phones. Today’s melody was more challenging than music they had done before, and one student kept stopping after just two notes, unable to remember or read what came next. She kept asking me “what comes next.” I’d ask her to look at the music, she would, and would tell me the note names on the staff and the keyboard, but then was unable to play the melody beyond the first couple of notes. I observed her trying to memorize the sequence of notes by letter names and then transfer that data to the keyboard. Her strategy was overwhelming her with too much information to handle or retain. I said, “I have noticed you trying a learning strategy that doesn’t seem to be working well for you. Let me suggest another way, and we’ll see if that works better.”

I then went over the “landmark” keys on the keyboard of C and F; landmarks because C is 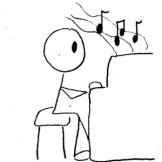 before the group of two black keys and F is before the group of three. I asked her to remember those two notes, and then start to remember where the other notes are in relation to them and the black keys. I then played the melody while she watched. Instead of trying to memorize what I was playing, I asked her to simply name what note I was playing at any given moment by watching my hand. As she did so, she began to connect her memorized sequence of note names to the piano keys. I then asked her to memorize the notes in groups instead of individually. It starts with two G’s followed by one B-flat, so we made that our first group. Eventually, she made the first group all of the notes in the first phrase except the last two. That was useful, because the second phrase is an exact repeat of the first phrase except for the last two notes. It was then easy to remember the last two notes of each phrase. Quickly the first two phrases were learned. Then, from what she could play on the piano, she could recognize what she was reading in the music. It was kind of like a modified “sound before sight” with the modification being playing the “sound” part included memorized pitch sequences partially learned from notation and partially learned by watching me play. She needed more visual learning than “sound” would allow. With her strength being visual learning, she may turn out to be one of the strongest music readers in the class. I will continue to match piano keys with what she is hearing after she has practiced naming the notes from notation. Eventually, I will try to merge the two so that she is hearing from notation while naming the notes and transferring the heard and read notes to the keyboard.