As teachers, we are all familiar with asking students to explain something. Explaining requires that students go beyond reciting a memorized answer, or randomly deciding on a response. Explaining involves giving reasons for why an answer was given, and the giving of evidence from a text. Demonstrating, on the other hand, is showing or doing something. It involves applying knowledge and skill to the doing of a task that makes a thing clear to someone else. One explains by using words, but demonstrates using actions. So what does it mean to explain and demonstrate something in music? How does one, for example, explain and demonstrate tempo? This phrase “explain and demonstrate” is found frequently in the National Core Arts Standards, so it is important that we understand what is expected.

Some of the things students are to demonstrate in music are musical ideas they have created and selected for inclusion in a composed musical work for a stated expressive intent. In the creating artistic process, third grade students are to “demonstrate selected musical ideas for a simple improvisation or composition to express intent.” Some other examples are not so immediately clear. In the performing artistic process, those same third graders are to “demonstrate and explain how the selection of music to perform is influenced by personal interest, knowledge, purpose , and context.” In this case, students would need to demonstrate some aspect of an interest they have that is related to the music. They might share an interest in folk music by performing a folk song about the same subject, or a similar song they learned somewhere outside of school. Students would need to demonstrate knowledge they have about the music. They might have knowledge about where a song was most famously performed. Perhaps they know that the song was performed at a presidential inauguration, or that it was sung by a singer well known for singing gospel, or protest folk songs. They could play a recording of that performance, or show pictures from the press coverage. All of this could also be used to demonstrate context as well. In all of these cases, what the student is doing goes well beyond explaining or reciting facts. They are creating a context and showing an audience different aspects of the song, establishing a deeper understanding than explaining alone could.

Our third grader might also ” demonstrate understanding of the structure in music selected for performance.” This is still under the performing artistic process. Here, the student is showing that he or she understands how the music they are about to perform is put together. Here, the student might perform just the main themes, 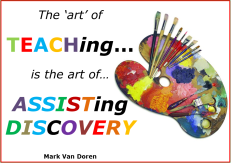 identifying them as “A,” “B,” or “C” within a three-part or rondo form. They might use same and different pictures to show visually the form that is found in the music, or they might present the phrasing structure through movement while singing part of the selected music. Demonstration goes beyond words. It gives the words further and more in-depth meaning, and helps others to better understand what is being presented. Demonstration also tends to include different modes of perception. Notice that while explaining the structure of the music just involves listening, demonstrating can engage the audience in visual learning (the pictures or the dancing), or even kinesthetic learning if the audience is asked to participate in the movement with the presenter.

The standards also include demonstrating related to interpretation in performance. Second graders are asked to “demonstrate understanding of expressive qualities (such as dynamics and tempo) and how creators use them to convey expressive intent.” There are two dimensions to this statement. The first is to demonstrate understanding of expressive qualities. Dynamics is an expressive quality. If the student were explaining, he or she would simply define dynamics, give an example, and perhaps identify music being performed as being loud, soft, containing a crescendo, and so forth. Demonstrating expressive qualities means that the child will actually do something that is forte, piano, or a crescendo. They might sing or play a portion of the music that includes dynamic contrasts, and they might show the audience how they produced those various dynamics. Part of what makes music exciting for the performer is the demands playing loud or soft makes on the body. The level of exertion, control, and command of tone is something that can be demonstrated to an audience when they can see the performer, but goes overlooked by an audience when it is only listening, as to an audio recording. With a live performance, the audience can see a wind players face turn red, see the sweat as they delve into a lively section, hear the intensity of the breaths being taken or the bows being driven upon the strings. A student who does all of this and thereby creates varying dynamics, and in an expressive way is going beyond explaining, and is demonstrating.

As you work with the National Core Arts Standards, take full advantage of those places where you find the word “demonstrate.” Use those standards as an opportunity to get your students more deeply engaged with musical works (texts) so that students who are listening can have a similar experience to the performer. Not only will this result in more rigorous instruction, it will also raise the value of live music in the lives of those students.