One of the mainstays of standards for music education has been to evaluate musical works. Whereas evaluating is a generally well understood concept when it comes to student work, evaluating artistic work has often been more problematic; it has been confused with editorializing. Under this confusion, if I like a musical work, then it is good, and if I don’t like a musical work, it is bad. This has led to an even more unfortunate position; that is, teaching students that the music I like is good, and the music you like, because I don’t like it, is bad or at least inferior in some way.  But whether or not I, or you, or anyone else likes a musical work is not a reliable indicator of the quality of that work. It may be one among other indicators, but opinion alone is not a sufficient criterion for evaluating a musical work. When one supposes it is, then that person is judging the musical work, not evaluating it.

In order to evaluate anything, there must first be criterion on which to base the evaluation. For example, we might evaluate a composer’s use of timbre when orchestrating a work originally written for piano alone. We could compare Rimsky-Korsakov’s popular orchestration of Mussorgsky’s Night On Bald Mountain to the composer’s own orchestration, and determine which is more effective in conveying the dark, supernatural, ghoulish, other worldlyness that Mussorgsky intended. The important thing is that we are comparing effectiveness to a purpose or intent; the composer meant to do this, and succeeded in these ways and fell short in these ways. The degree to which the composer succeeded in conveying the intent or fulfilling the purpose is the criteria. That is what true evaluation of a musical work must be.

Sometimes a musical work is evaluated on the basis of how well a composer executed his or her craft. Much was made in the play Amadeus of the difference between the imaginative improvisations on a theme of Salieri and the original work. Clearly, Mozart was being presented as the composer of “better” music because it was more interesting, imaginative 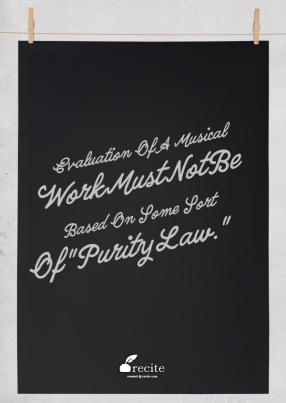 or original. This can be a valid basis for evaluation, as long as clear criteria are used to evaluate the craft evidenced by a composer. But even here, we must be careful not to overlook purpose in our evaluation. While Mozart’s music may have legitimately been evaluated higher than Salieri’s in terms of execution, Salierei’s little ditty is clearly ranks higher if the criteria is repertoire for a beginning keyboard player.  In the play, Salieri’s pupil struggles to play the simplest of tunes with a left hand accompaniment, so Mozart’s elaborate ideas would be entirely unsuitable for the beginning student.

That said, evaluation of a musical work must not be based on some sort of “purity law.”Mozart’s mastery of sonata form in an opera overture does not necessarily mean that the overture to the Magic Flute is a better overture than, say, Wagner’s overture to the Flying Dutchman, in which sonata form is not as pristine. Both overtures are effective in doing what one could argue a good overture is supposed to do: set the mood and emotion for the drama to come, and preview some of the themes that will be important later on. With these criteria, Wagner’s overture is every bit as effective, if not even more so, than Mozart’s.

Notice I have so far used comparisons between musical works of the same genre. This is important, because an artistic work should only be evaluated against other works that are similar and that were designed with similar intents. It will not do at all to compare a Mozart overture to a song by Justin Bieber, or a song by Drake to a solo by Charlie Parker. It is valid to compare styles and genres, but not to evaluate them so that one genre or style is claimed to be superior to another. That again, is not evaluation, but judgment. Evaluation should never preclude or discourage students from listening to music they enjoy. We as music teachers should be teaching music concepts, and concepts over arch all of music. Tempo, rhythm, pitch, timbre, meter, and phrasing or grouping are present in all music, and can be taught with any music. In fact, West African drumming provides a richer context from which to teach rhythm than the relatively rhythmically limited context of Western  art music. While you could teach thematic development in the context of Western art music, including the symphonies of Haydn and Mozart, you could also teach it along with improvisation with Hindustani classical music in which the player develops a performance from  a raga.   Hinustani classical music  European classical music written by Paganini or Liszt, electric guitar solos by the likes of Joe Satriani, Jimi Page or Van Halen, jazz solos by the likes of Charlie Parker, Art Blakey or John Coltrane are all dazzling in the depth of invention and the skill and virtuosity of the performers.

None of the genres from which these great musicians come can legitimately be found to be inferior to another. Different, but not better or inferior. Indeed, this sort of judgmental thinking has at times distorted American’s view of our own musical history. Consider that although Gershwin’s “I Got Rhythm” has generated at least as many songs and improvisations as the blues, Gershwin is rarely discussed on the same level as contemporaries Ravel or Stravinsky. Yet it is Gershwin’s music and not that of the others that repeatedly earns sold-out houses and rousing ovations. Consider this account, found in the Atlantic in 1998. “Two years ago in Vienna I heard the orchestra of the Metropolitan Opera, which many American critics have hailed as the finest orchestra in this country, perform Wagner’s Rienzi Overture, Bartók’s Miraculous Mandarin, Strauss’s Don Quixote, and, almost as an encore, Gershwin’s An American in Paris — a difficult program, chosen to show off the orchestra’s technical prowess and stylistic range. The audience sat on its hands after the first three works, bursting into an ovation only after the Gershwin” (Schiff, October, 1998).

Music is nothing if not heard and enjoyed. There are various degrees of excellence found within every genre, style, and historical period of music. Each kind of music grew and matured out of a particular culture and for particular reasons. The quality issue has for the most part taken care of itself. We have classic repertoire and we have forgotten repertoire. Both standings are a result of a popular kind of evaluation wherein the public has either sustained its liking or not. But it is also true that madrigals, fugues, love ballads, dance music, and rowdy songs have also existed for centuries, and none of these musical forms or genres is better than another. Each was designed to serve a purpose and a public, and each still does. We must stick to evaluating within genres, and avoid judging genres themselves.