The term “beat” is arguably the most misunderstood in music. This is evident from the disparate ways the word is used, even among music educators and professional musicians. For example, is a beat something musicians see, hear, or audiate? Directors often tell students in their ensemble to “follow the beat,” intending that the musicians see the beat being conducted and conform their playing to that beat. Those same directors may then send their students home and instruct them to practice with a metronome so that they can hear the beat while they play. At still other times, a class of students may be asked to move to the beat of a classical music selection being played, in which there are rhythms but none exactly the same as the beat, so that the child must audiate the beat and then move to the beat that is being audiated. When we stop to think about it, we can reasonably conclude that very few musicians, let alone music students, can properly define beat. This confusion comes primarily from getting things out of order.

To students for whom popular music is the only genre they encounter, a beat that is not

heard does not exist. I have heard students say many times that they do not like listening to classical music because it doesn’t have a beat. They will explain that a rap or rock song has a beat, and they will be happy to point out the drum part to prove their point. Then, they will point out that the bit of Mozart or Beethoven I just played for them has no such thing. There aren’t even any drums at all! Within the context of their definition of beat, a steady pulse that can explicitly heard in the music, they are quite right, Mozart’s symphonies have no beat. But which one of us would accept that statement as true? Of course Mozart’s symphonies have a beat. The difficulty in the student’s position is not that it is wrong–based on his assumptions in fact, it is exactly right. The difficulty is in a faulty definition of beat. If beat is present in music in which a beat cannot be explicitly heard, then it must be true that a beat is not something that has to be heard, or something that even is heard at all. Those drum beats in the rock song coincide with the beat, but are not the beat itself.

A beat in music is a series of equally spaced points in time that a listener extrapolates from the musical sounds he or she hears. Within these points of time one sound may occur, which coincides with the beat as in our rock song, or two or more sounds can occur, producing a division of the beat. The first of these sounds still coincides with the
beat, the others are divisions of the beat. At times, one of these points in time may be silent. These points of silent time are in music are called rests. There is still a beat perceived during the point of silent time, proving that a beat is not something that is heard, and a division of that point of silent time can still occur in the form of one or more sounds that precede the next beat. There are also occurrences where a note begins on a beat and has a duration that extends into one or more subsequent beats. Again, as the note is held out across multiple beats, those after the initial one are not heard but still perceived.

Rhythm is quite a different thing from beat. Rhythm is physically present in the musical sounds, beat is not. Listeners audiate beat from hearing rhythm patterns, and they audiate meter from the audiated beat. Although beat and rhythm are different, they are closely associated and dependent. This is immediately apparent if you ask a musician to play a beat without playing a rhythm. It cannot be done. Even if the musician just plays steady 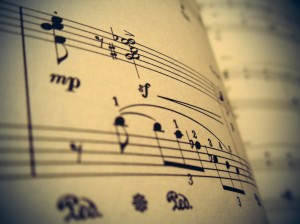 identical notes on a drum, he is playing a rhythm that coincides with the beat. Rhythm patterns reveal the beat, and the meter. Whereas beat is comprised of equally spaced point in time, rhythm is comprised of sounds heard in relation to those points in time.  Beyond that, there are other difference as well. Whereas the points in time that are the beat are equally spaced, the sounds from which a rhythm is created can be equally spaced, but are most frequently of varying durations. This is most easily stated by saying that beat is steady whereas rhythm changes.

The trouble we run into hear is that in common usage a hip hop beat is actually a rhythm. We see this misuse frequently in marketing of composing technology. Just Google “hip hop beat” and you will find dozens of beat making items, all of them generating or providing rhythms typical of the rap genre. It is probably one of those battles that is unwinnable, but students should at least understand that when discussing types of music
other than rap, a beat is a different thing. With some careful and focused listening, students can in fact hear a true beat to which has been added the characteristic rap rhythms that all together form the “beat.”  It is also valuable to show students a video of a rapper rapping. Have them observe the body movements of the rapper, especially his hands. They are often moving to a beat, but never to the rhythm of the rap. This visually portrays the difference between beat and rhythm: the beat coincides with the rappers physical movements, while the rhythm is heard in the words being rapped.

Let me conclude by returning to our music director who asks his players to follow the beat they see him conducting. If beat is audiated from rhythm, how can an ensemble play to a beat where no rhythm is heard? The players in actuality cannot “follow” a visual representation of a beat. They must audiate the rhythms they are about to play, and then the beat from the audiated rhythms. The conductor’s gestures may serve as a stimulus for audiation, but they cannot in and of themselves, produce a beat from the ensemble. This is why so many conductors have so much trouble getting student ensembles to follow them; they are asking the students to do the impossible. Professional musicians can overcome this by relying on their knowledge of the music and their audiating skills, but student musicians cannot, and so do not play with the desired beat until it is at last drilled into them after many taxing attempts. The best way to get students to play with a particular beat is to teach them the rhythms involved first, and then allow them to audiate the beat from the rhythms.