I recently became acquainted with the word, “dramaturgy.” The context in which I found the word was an article discussing the teaching of dramatization to music voice students on a path to learning opera singing. The writer argued that by comprehensively studying a whole opera, including musical, historical, compositional, and biographical aspects, and not just of the parts a given singer needs to sing, but of the entire work, the singer would learn to perform not just accurately, but dramatically. The job of a dramaturg, then, would be to assist the singer in this preparation and study.

Intrigued, I began looking into the word further. Dramaturgy is a concept developed by Sociologist Erving Goffman. Essentially, Goffman believed that all of life really is a stage. People are actors on the stage of life, acting out their assigned roles either alone or in collaboration with other people. Other people that are part of our lives are doing the same thing, acting out their roles in life as they interact with us.

This sociological theory, drawn on a metaphor of the theater, has apparently migrated into the theater, where we can now find people employed who hold the 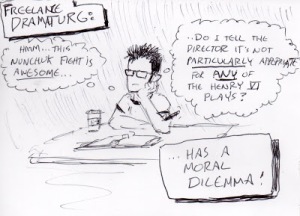 title of “dramaturg.” There is a professional organization for them, the Literary Managers & Dramaturgs of the Americas (LMDA). From their website, I learned that dramaturgs can be involved in virtually every aspect of theater production, including those aspects I normally associate with directors & producers. Among the lengthy list are two that stood out to me, because they at least are directly related to the practicing of one’s art as opposed to seeing to legal matters. These two are “seek and present pathways into the world of the play,” and “explore and present: the world of the play.” The connection to Goffman’s theory now begins to become apparent. The dramaturg is trying to connect the fictionalized drama of the theater play with the real-world drama of the lives of the people who are watching the play and who are all themselves acting in the play of life, which, presumably, they have temporarily taken leave of just long enough to attend the theater (or else every theater play is a play within a play). The playwright, in his role as person in the world, provides an entry point for everyone else to witness part part of the life-play, or in the case of his work, perhaps his life replay in the theater play. In the process, all in the audience become emotionally invested in it, and perhaps influenced by it as they return to their own life plays when the theater play is over.

Opera adds another layer. Whereas theater plays utilize language and acting, opera adds to these music, which transcends the expressive capacity of language, save perhaps for poetry. Music provides a means and an outlet for expressing emotional realities that cannot be accommodated by words alone. If theater plays take life plays off the street and make an author’s life play community property, then music when it is performed, which I will for convenience call the music play, takes the life play and brings it beyond what is possible outside the musical experience. Music is no longer a replay or retelling of real-life drama, it is the imagining of something beyond what can physically exist, beyond what can in reality take place in the life play. When a musician learns to perform dramatically, they are stepping outside themselves, and offering something that is beyond the reach of everyone, and so to which everyone responds in a physical and emotional way that is nearly unique in the physical world, and unquestionably unique when the absence of danger and the enjoyment or even thrill of the experience is considered. There must be, I think, something quite beyond the reach of a dramaturg, once the flow of what music does is active in the performer and on course to all who will hear the music. Bringing a young performer the power of such expression is a noble profession, and if that is what a dramaturg does, then bravo to every one who succeeds. It also comes to my mind that there are a large bastion of people who also bring this musical prowess to fruition: countless music teachers whose great delight is to watch their students take of in flight through the realm of musical expression.