Anyone who has taught music lessons more than likely has encountered students who were only interested in playing fast. They come into your studio and start flying all around the music, but rarely land in just the right place. They are moving quickly from one note to the next, but the rhythm is uneven and the tone is uncharacteristic. You know what the remedy is, but the challenge is convincing the student to take the medicine. How do you convince such a student to go on an extended diet of slow practice?

The key to solving any problem is to state the goal, define the problems they need to be solved in order to reach the goal, identify the solutions, make a plan that will put the solution into affect, and put the plan into action. The first order of business with this student is to redefine the goal. The student’s goal is to play fast. That is only part of your goal for your student. Your goal is for your student to play accurately, evenly, expressively, with a characteristic tone. Your goal will lead to the student’s goal, and a lot more. That is what the student must realize.

First, I would tell the student my goal, and then I would play the music the student has just attempted to play, at the correct tempo. I’d ask the student what the differences were between their performance and mine. I’d get around to discussing evenness and tone, and how these not only allow the music to sound better, but they also give me the power to be expressive, and music first and foremost must be expressive. Next, I’d slow my tempo down to one that is just a touch faster than what the student can play evenly. I’d have the student play with me, and try to match my playing, note for note. When the student realizes he or she can’t quite keep up and maintain evenness, I’d ask, “what do you think would happen if you just kept practicing at this tempo? Would your playing get any closer to mine? Would you be able to play it any more like me if you tried again?”

I’d let the student try it again, maybe even two or three more times, but at the same tempo. When the playing didn’t improve, I’d explain that what the 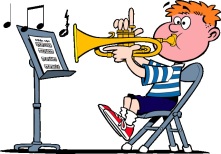 student has done so far is practice mistakes—practice playing unevenly. To get it right, there has to be a way of practicing evenly, and without mistakes. I’d explain that when I learn a piece like this, I start by playing it ridiculously slowly, over and over again, so that my brain has time to remember everything it must do. I’d demonstrate this. I would also show the student how to practice the same passage with different articulations to help with evenness and to avoid boredom. I’d then have the student go through this process for one or two measures. Most students will learn a short passage using slow practice in a few minutes. If they play it many times slowly, they don’t have to gradually work the tempo up—they can just play it at tempo; the learning has already taken place. When the student has succeeded at this, I will point out that if they could get that passage that good in just a few minutes, imagine what the whole piece could sound like if they practiced it like that for a week or two. It would sound better than they can imagine right now. “Isn’t that,” I would ask, “what you really want to be able to do—to play fast and relaxed, accurately and expressively?

No one gets anywhere without traveling from here to there. Music is no different. No one plays fast and relaxed, accurately and expressively without traveling along the road of slow practice. But just as traveling to a vacation spot is filled with excited anticipation that makes you willing to sit in the car or the plane in  order to get there, slow practicing can also fill you with excited anticipation that makes you willing to put in the hours of practice in order to get to the point where you can play the way you want.