As we enter another holiday season, I’m sure many of you who teach have already noticed the children getting a bit excited. Often, managing classroom behavior becomes more difficult as holiday anticipation and excitement builds. For this reason, it is good at this time of year to consider strategies that will help us stay on track without creating more tension between students and teacher than is necessary. When I anticipate children arriving in my classroom less prepared to settle in and learn than usual, I shift the way I plan my lessons. My plans become less specific in terms of classroom activities. The objectives are stated clearly up front, and then I brainstorm two or three activities I might use to meet the objective. I give more thought to using fun activities, and activities that involve getting up and moving around. Circle games and dances, movement for interpretation and form, and drumming are three such activities that almost always work well. I also like to have a written work version of my plan, so that if the class comes in too restless, or if the class would be over stimulated or even loose control were I to bring them into a game or dance, I will give them a set of questions or a writing prompt to get at the concept or skill I planned to teach.

For example, today for a 2nd grade class, I wanted the children to move and sound like one of four animals I would imitate on the piano. This would allow them to move around the room before settling in, and would warm up their singing voices. I soon realized that having them do that version of the activity was not going to be successful today, so I opted for the written version. I still played the same bits of music on the piano, but instead of moving and making sounds, they wrote down which animal I was representing, and then explain their answer by describing the musical sounds they heard that they associated with that animal. The concept of musical association with animals was successfully taught, and by the time they finished writing they were settled enough to warm their singing voices up from their seats, and then proceed to the singing activities for the day.

Some days, the opposite situation presents itself. The students come in and are just too restless to sit and begin an activity from their seats. In those cases, it is best to select an activity that will get them up and moving around the room. I find that dividing the class into small groups and locating each group in a different area of the room works for me. They can get out of their seats, move to a more private location but still in my view, and begin collaborative work without direct instruction from me. In this case, they are given a task or a problem to solve which they are already prepared to complete without my help. It is a little like an extended “do now.” For example, I might just have everyone in a group teach the rest of the group one thing about something we learned last class. With my 7th grade, I have been doing a unit on the history of early rock and roll. If I were 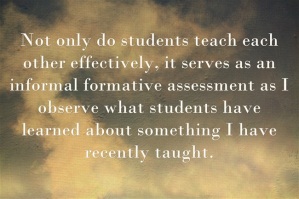 using this strategy with one of those classes, I might have everyone in a group teach the rest of their group one thing about Chuck Berry. They could teach part of a Chuck Berry song,  or share thoughts, opinions, or observations about Chuck Berry. I monitor the groups as they work to see what’s being done and talked about. Not only do students teach each other effectively, it serves as an informal formative assessment as I observe what students have learned about something I have recently taught. The students then have the option of sharing with the whole class something they did in their group.

There are other times when direct instruction serves to focus a class, and to gather them in from the conversations and inattentiveness that can take hold at the beginning of the class if the students don’t have something meaningful to do right away. Today, my 7th graders were chatty when they came in. My objective was for students to learn the guitar strumming patterns from two songs I would play for them, and then to perform those two songs on guitar while singing the choruses. I was going to start by playing some music and have them listen for and pick up the strumming patterns and practice the rhythm of them on their laps while they continued to listen. But the talking was going to be difficult to stop, and without doing so, they would be unable to listen closely enough to complete the strumming pattern task. So instead I “called an audible” and taught the whole class how to play power chords on the electric guitar using the strumming pattern from one of the songs. The sound of me playing the electric guitar got their attention, and then when I played “Whole Lotta Loving” by Led Zeppelin and played E and D power chords along with the recording, the students were soon interested to learn how they could do that too. They picked up the strumming from me instead of the recording, but the objective was met. I hadn’t planned on playing guitar so early in the lesson, but my playing the guitar got their attention in a way that just playing the recording would not have.

The key to this is knowing what you want your students to know or be able to do as a result of your teaching, and then to be creative and open to finding multiple ways for your students to achieve their goals. While I don’t advocate “winging it,” experienced teachers can call an activity or strategy to mind that will lead to the same destination as the planned ones. Such creative teaching makes for more successful days when the students are more challenging, and provides freshness and even fun to teaching, as the creative mind is set loose to find a better way to reach students that day.