One of the things my students hear from me frequently is to look at the person who is (supposed to be) speaking. I tell them that I want eyes on me when I’m speaking, and eyes on the student who is asking or answering a question. The reason for this, I explain, is that we give our attention to what we are looking at. It is much easier to attend to someone we are looking at while another is talking, than it is to attend to someone who is talking while we are looking at someone or something else. That this is so is why live music is and always will be better than recorded music. When we can watch musicians making the music we are listening to, we draw more out of our musical experience. We pay closer attention to the music when we can see the musicians performing. This is not only because we are able to watch the performance, but also because we are able to collect information that is only available visually. We can watch the musicians move, watch their facial expressions, their fingers move on an instrument, draw a bow across a string, exert themselves blowing into an instrument and form an embouchure. Performers often interpret the music they are playing not just with the sounds they make, but with the movements they make also. A phrase accompanied by the visual impression of a smooth swoop of a flute, or the abrupt jabbing and bobbing of the head of a wind player brings out the interpretive nuances that are less noticeable and perhaps overlooked by the listener who can only hear and not see the music being performed.

All of this is also true of the listener. There is a vast difference between the musical experience of one at a concert who places the music in the background of their thoughts while gazing around the hall, looking at the artwork on the ceiling or the person next to them silently texting, and the one who is scanning an orchestra, finding the player or section producing a timbre that is of particular interest, or taking in the whole stage as the orchestra delights with a rousing tutti finale to a late Tchaikovsky symphony. The latter is listening not only with the ears, but also with the eyes. There is simply no comparison between what the visual and auditory parts of our brains can do when working together and what either can do apart from the other. Moreover, we seem to be much more visually oriented than auditorily so.

Our bodies are not limited to experiencing music with only our eyes and ears. There is much more to our musical capacities than these. Most of us respond to beats and rhythms by moving our bodies. Indeed, it is a rare person indeed who can sit completely still while 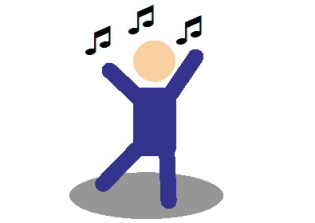 listening to music. Cognitively, this should not come as surprise, because researchers have found that music activates the same portion of the brain that controls motor functions. In other words, even if we weren’t physically moving to music, our brain thinks we are. Different people tend to move different parts of their body to music, but some part of nearly everyone moves to music. For me, it is my head. In fact, when I conduct ensembles, I have to consciously keep my head from becoming the focal point of the musicians I am leading. Moving my head to the music is how I get the music into my body. Once my body is moving, my emotions become involved, and the music takes on meaning.  As this goes on, my nervous system also becomes involved as evidenced by the rush of adrenaline when I am surprised by a sudden burst of loudness, or by goose bumps when a particularly beautiful melody is played. I become thrilled at a beautiful melody, excited with a powerful and advancing allegro, and giddy with anticipation as the music builds to that climax I know is coming but that works its power over me anyway. My whole body is listening to the music, and because of this, I am enjoying the music infinitely more than the fellow nearby who is bored already with the artwork on the ceiling of the concert hall, or who has given most of his attention to a text message.

Unlike the visual input I can only get at a live performance, these kinesthetic, emotional, and nervous system involvements in music are available to anyone anytime they are listening to music. But they have to be truly listening; that is, they must be directing their attention to the music, and to these responses their bodies are having to the music. The emotions, goose bumps, adrenaline, movements and so forth are all things that, like the visual of a musician making music, can be observed and enjoyed in real time. Conversely, they are all aspects of a potential musical experience that go unnoticed for the person who has music playing in the background while engaging in other activities. A person so engaged may still be moving to the beat, or feeling a rush of adrenaline stimulated by the music, but they are frequently using those responses to help them in non-musical endeavors such as pumping themselves up to compete in an athletic event, or provide diversion from an otherwise menial task they must perform in the workplace. While both uses of music may be helpful, they are not so much enjoying as they are using music, much like a drill sergeant uses a cadence to keep his soldiers in step as they march. I dare say that today more people use music on a daily basis than enjoy music. As music educators, it is important that we teach our students to enjoy music. This means we must teach them to elevate how they interact with music in their daily lives from music users and consumers to music enjoyers and makers.