Every now and then I’m reminded that there are some hints I take for granted that are perplexing to some students. The learning activity for fifth grade classes was to listen to the first ten minutes of Maher’s fifth symphony and make a list of each emotion they heard expressed moment to moment. The activity was tied to a school-wide emphasis on using words to communicate how you feel. With paper and pencils ready, I started the music.  All but one student immediately began writing. The one just sat there looking more confused by the second. I went over to him and quietly mentioned that he looked confused. “I don’t understand what to do.” I explained what I wanted and then he replied “but there aren’t any words,”. There it was. He could not imagine how music could express emotion without words. As the music continued I asked him what he thought a person would feel when they heard that music. He listened for a few seconds and then said scared. He wrote that down and then was able to come up with a short list by the time the 10 minutes was up.

Some students came up with short lists while other students wrote down twenty or more emotions. Some words on a few 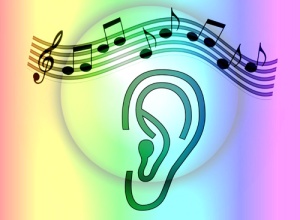 lists had to be removed because hey were not emotions. For example, two students wrote “loud.” After further questioning and discussion the class decided “furious” was an emotion that fit what was going on in the music when it was loud. Another student wrote “sounds like ballet music.” I explained that while this could be a good description or connection, it also was not an emotion. Because there were other words on this list that were not emotions, I had the student read the whole list, and the class indicated by hand signals whether it was an emotion or not. The student crossed off words that did not refer to emotions.

Two observations can be made. First, not all fifth grade students have a clear understanding of what an emotion is. That was evident in the words some of the students included in their lists. They understood when they realized that an emotion is something a person feels, and not something that music is. Music is loud, but a person cannot feel loud. Instead, loud music can be used to expressed emotions like fury or anger. The emotions one feels when one hears a particular bit of music is important because emotions are an essential part of what music is. Emotions are also an essential part of what a person is. Music can help children know what those emotions are and to understand themselves as feeling beings.

Second, not all fifth grade students recognize expressed emotions in instrumental music. It has been observed elsewhere that children primarily listen to lyrics and less to the music. The one student’s perplexity was a piece of evidence that supported this observation. Many students rarely listen to music without words outside of music classes, and of those times they do listen to it in class, they may be focused on something other than emotions, such as form, instrumentation, a programmatic story, or movement. They may lack experience with hearing instrumental music as an expression of emotion. Film music, the one genre of instrumental music many young people do listen to, is visually interpreted for them and so does not afford them the opportunity to discern the expressive intent on their own. These are two areas to which music educators can give more attention: teaching students what and how music expresses emotions apart from lyrics, and teaching them the difference between an emotion, a connection, and a characteristic.