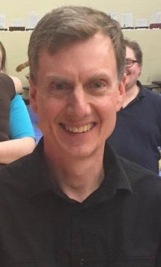 No matter what method you use to teach music, be it Kodaly, Orff, or any other, when it comes to music reading there are certain aspects of our music notational system that are counter-intuitive and confusing to students who are just beginning. One of those difficulties is often the irrelevance of how the notes are spaced on the page. Students naturally assume that notes that are closer together go faster, and notes that are spaced further apart go slower. They will even carry this into the same note value. For example, they will think that quarter notes spaced closely together go faster than quarter notes spaced further apart. The concept of how the note head, stem, and/or beam are drawn can become overlooked, leading the student to make frequent rhythmic errors.

It is always good pedagogy to start from where students are and work from there to where you want them to arrive. Rather than dismiss using spacial perception as wrong, why not take advantage of children’s intuitive ability to perceive spacing in teaching them to read note durations accurately? Catherine Schane-Lydon has invented Toccata Blocks that do just that. 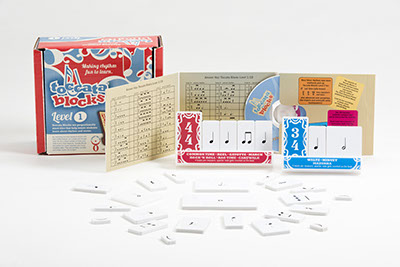 I gave a set to students in middle school, and students in 2nd grade. An 8th grader said, “it [toccata blocks] helped me learn how the notes go together.” A 2nd grader remarked, “making rhythms is fun with these blocks. I got it wrong at first, but now it fits.”

I also used my set of Toccata Blocks to do a full class demonstration. I began a rhythm and then called on student to finish the measure. After each addition of a block, I asked the class if the measure was finished. “Do the blocks fit perfectly?” The children would look and respond, then give me suggestions on what block I should put in next. If the next block hung over the end, they were quick to reject that choice and make another of a shorter note duration. Almost every student I gave these blocks to to use immediately understood how they worked, and were able to correctly create a measure of rhythms.

Of course, I want students to write rhythms on conventional music paper, so it was important for me to make sure they took note of what notes they were using, and didn’t just fill up the easel randomly. So I had them tell me with each block they added how many beats that block added, how many beats they had, and how many more they needed. It was helpful to them to learn the note durations, and it delighted our school math coach!

With the length of the blocks proportional to the duration of the note, it is also possible to use the blocks as prompts for creative movement. The whole note block is long, and so a long, extended movement is called for. The quarter note blocks are short, so they call for smaller movements. Turning this into a movement game, children draw blocks like playing cards, then begin walking around the room. If a whole note is drawn, one giant step that takes four beats is taken. If a quarter note is drawn, then four smaller steps that traverse the same distance as the child who took the giant step is taken. Using them in this way helps students deepen their understanding of why the blocks are different lengths, and how the various note durations relate to each other.

Students worked well in small groups finding blocks to add to a group composed rhythm. I have learning centers set up in my classroom, and the Toccata Blocks make a good basis for such a center. With my older students, students who have composed a rhythm on the Toccata Blocks can then take it to students working on the keyboard to add pitches to the rhythm, making a short, one-measure melody. This rhythm then can become the basis for extending a melody.

The blocks are made of durable hard plastic. I anticipate that they will stand up well to classroom use. There is also a CD included with rhythms for students to build with the Toccata Blocks, taking dictation from the CD. The basic set includes quarter and eighth note durations in simple and compound time signatures. Supplemental sets add sixteenth notes to the basic set. Each block has a note on one side and the equivalent rest on the reverse side, so students can learn both notes and rests together. Toccata blocks are suitable for students in second grade and older, though one must be aware that many of the blocks could be a choking hazard for children prone to put such things in their mouth. I have had encouraging success with Toccata Blocks. They are certainly worth looking into. For more information, go to toccatablocks.com.