It seems simple enough; when music gets faster, we call it an accelerando. Orchestral musicians know they have to watch the conductor, and conductors know they have to give an increasingly faster beat to create the accelerando. As far as it goes, this is all correct. But increasing the beat is not the only way composers and performers create increases in speed. It is the only way they create increases in tempo. But are they the same?

Consider the beginning of the fourth movement of Dvorak’s symphony no. 9, “From the New World.”

The tempo is constant throughout, but the speed of the music clearly increases. This increase in speed is achieved entirely through rhythmic means. The motif of an ascending semi-tone (half step) is written with a longer duration on the first note of the interval, and is followed initially by two beats of rest, thereby spacing out the second occurrence from the first. After one repetition, the duration of the first note is reduced by half a beat, and the rest between occurrences is also reduced, from two beats to just half of one beat. By the fourth measure, the first note of the interval is down to only half a beat, and the rest in between is down to one-quarter of a beat. In each case, the unit of the beat is the quarter note. By composing the rhythms this way, Dvorak has written an accelerando without increasing the tempo; therefore, accelerando and increase in tempo are not synonymous.

Apart from changes in speed, rhythm is also frequently used to present the same melodic material at the same tempo but at different speeds. Brahms was particularly fond of doing this. For example, in the fourth movement of the A Major Piano Quartet.27, measure 467, the accented material that is heard throughout the movement is played in the violin and viola in its original form, while in the piano, the pianist’s left hand plays it half as fast due to elongation, but at the same tempo. 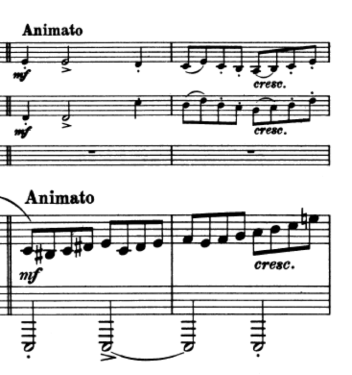 From the listener’s perspective, the tempo at which music is moving is going to depend to

a large degree on what beat unit he or she perceives, while we could expect the speed of the music, because it is measured in time and not beats, will be more reliable and consistent from on listener to another. An example of this is the first movement of Beethoven’s fifth symphony. A person (or conductor) who perceives the beat in quarter notes is going to find the music has a fast tempo; it has both a fast (quarter note) beat, and mostly durations that are divisions of that already fast tempo beat. A listener (or conductor) who perceives the beat in half notes is going to find the music has a moderate tempo and a fast speed; it has a moderate (half note) tempo, and mostly durations that are further divisions of that beat. The speed is still fast because the notes are moving at the same rate per second, and are divisions of divisions of the  half note beat.While rare in practice, it is even possible to perceive the music with a whole note beat, giving the music a slow tempo but still fast speed. Listening to, conducting, or performing music with a slow tempo beat is valuable because it reveals rhythmic structure at a deeper level, focusing our perceived organization of the music over longer time spans compared to zeroing in on beats that occur over shorter time spans of music. For musicians, it is useful to be flexible in this matter so that listening comprehension is enhanced, and difficulties adjusting to conductors who use a different tempo beat than the musician is used to are minimized.

I mentioned earlier that tempo is measured in beats, while speed is measured in time. This statement needs some tightening up, because tempo itself is a kind of speed, and tempo is typically defined in units of beats per minute, as revealed in tempo markings and metronome usage. The distinction between beat and speed is necessary, as we have seen, because they can go in opposite directions. Even so, ultimately both are defined by time. This being so, the speed at which music moves must be defined entirely by time, and specifically by the number of musical events, whether they are beats, elongations of the beat, or divisions of the beat, that occur per unit of time. It is useful to define beats in units of occurrences per minute, because that is the established convention, and because beats are slow enough, even at fast tempos, to be so defined. Divisions of the beat, on the other hand, are more conveniently defined in units of occurrences per second. This is useful because knowing only the tempo does not give an accurate description of the speed.