Today, I want us to think about a question that most of us have either overlooked or taken for granted. I want to explore why we teach people to play musical instruments. This is a deceptively important question, because how we answer it affects everything we do with our instrumental students; it affects what we teach, how we teach, and perhaps most importantly, it affects how lasting the affect and benefit of music education is going to be on students after they graduate from our program. NAfME (formerly MENC) provided us with nine content standards, and among them was this:

Performing on instruments alone and with others a varied repertoire of music.

This content standard, when we stop to examine it, gives us a clue as to how to answer our question. To do so, we must ask three more important questions:

We have now arrived at the doorstep of the other questions I raised. Students should perform on musical instruments both alone and with others, because in each of these settings, a different reason for playing on instruments is addressed. Playing on a musical instrument alone enables the student to be self-expressive and musically independent. When playing on a musical instrument alone, the player must make all decisions and execute all notes and phrases correctly on his or her own. There is no possibility of relying on others to carry the tune, nor to make interpretive decisions. The student must rely on his or her own interpretive, emotional and physical powers to play well. To avoid doing so would be to play in a perfunctory, artistically bankrupt manner, which would be missing the point entirely. It is in playing alone that the student develops the skills, concentration and will to be a powerful interpreter of art. Instrumental teachers who do not provide ample opportunities for students to play alone deprive their students of the means to acquire fundamental aspects of musicianship.

Playing a musical instrument with others draws people together emotionally, which strengthens relationships 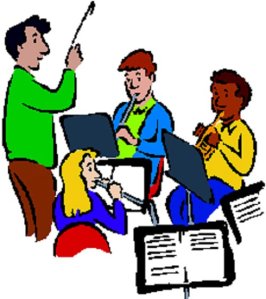 and harmony between individuals who would not otherwise relate to one another as well. It also enables a player to participate in performing music that would be impossible to play alone; music with harmony, counterpoint, and a variety of timbres. It is upon these very things that Western art music is built, and from which the great masterpieces we wish to familiarize our students with is forged. Western musical culture is, in all of its variety, tonal, and therefore dependent on multiple tones being sounded together, an arrangement that requires, in most cases, the employment of people playing on instruments together. Students should also play with others because that is how music for most instruments in our Western culture needs to be performed in order to produce harmony. Although there is a repertoire of solo works, it is relatively small, with the exception of keyboard and guitar repertoires. Most Western music is written for at least two instruments.

Within that Western culture, there is a large variety of musical traditions. To focus on one while ignoring the others would misrepresent Western music, and deny many students the opportunity to learn about their own musical heritage. Western music is more than centuries old sonatas, concertos, symphonies, tone poems and operas. It is inclusive of many other traditions such as Indian raga and Native American songs, all of which have a rich instrumental repertoire.

Where does that leave instrumental music programs that feature concert bands, wind ensembles, and symphony orchestras? Often, it leaves them playing narrow repertoire that is not inclusive of many Western traditions, or playing arrangements of songs from these other traditions that misrepresents the original music because it is not properly contextualized. It also leaves it lacking in opportunities to play alone, instead providing hiding places for underdeveloped student musicians. To fully implement the standard, and to realize the intent of the standard, instrumental ensemble directors should implement the following action points: